I'm baack...  and what an exciting time.

I have loaded the latest ubuntu and the latest mint, and boy is there big news for the multi user functionality

Previously to get multi user rdp sessions with GUI desktops there were a lot of hoops to jump through.

Now you just load the xrdp and xorgxrdp packages, No big script to run, no recompiling, and you have a multi user gui linux box

Just create your other user accounts and passwords, and voila... you can just log in via rdp and use your own linux gui desktop on the server.


Wine 3.0 is the default wine for the new distros, and it runs avimark, even avimark 2018 just dandy.

Set your share on the linux box straight from the file browser in mint or ubuntu for the avimark directory there to share but not allow guests.

All the file sharing seems to work without special edits of the smb.conf now.

I have experimented and run concurrant wine and windows sessions against the same avimark database with no apparent ill effect.

so I am going to continue to play with this, but most of the hard stuff from before is now more or less automatic.  Whats not to like?
Posted by Unknown at 7:41 AM 2 comments:

I literally had almost forgotten the blog.. till I got an phone call with some questions today.

I ran on ubuntu/x11rdp/wine from the last blog entry till this summer, and with the usual occasional printer trouble or other network issues that everyone has occasionally, we just soldiered on.. I believe the server was still 12.04..

Then my main hard drive started getting flakey.. a few bad sectors... some hangs, and of course, during the busy time of year.

I didn't have a recent clone with all my account info, and such loaded, so I created a quick new machine running ubuntu 14...

Ran the x11rdp script, prepped the machine, and transferred over the avimark operations to the new server.. and it worked... mostly.... sort of.

Something was different with the file permissions setup, and I was having trouble particularly with attachments being moved into the avimark directory and being available to all users.   Tried multiple things, but working on a production system in the busy time of the year just wasn't a great time.

I had migrated the emergency clinic to a windows server a few months earlier, and I bit the bullet, and loaded a copy of server2012r2 onto a new machine.  Ran for a while plain vanilla, but wasn't real happy with the speed.    Ran client/server avimark and was happier with the speed.

Once I had the learning curve down, it was much simpler (although more expensive) to make the leap back to Msoft.

I still use a linux box as my ssh gateway, and also as my personal desktop.  I use several other linux boxes to run rdp sessions off the Windows server.

I may take some time this winter to look at another xwindow multi desktop sharing model called xtogo under linux.   Also may pound out the file sharing difficulties on a machine that I am not using for real work at the same time.

Still available for questions, but for the time being, I do not have a linux rdp setup running in actual business environment.   Just ran out of time when the server hard drive got boggy.
Posted by Unknown at 2:54 PM No comments:

This may be the best Windows imposter (security blanket) ever for someone wanting to do a linux install for a reluctant end user...  Q4OS... google it.  It is a debian/kde derivative but the best out of the box wolf in sheeps clothing I have yet to see.   Can be set up to look like xp or 7.

Very low overhead (300 or so meg download)  Easy facilities on the download page to load chrome, wine, etc etc as pre configured installs, and it works with the debian repositories, so anything can be added using apt or synaptic, which I loaded right away.  Should run well on legacy equipment.. I will probably try a memory stick install too..

Blazingly fast on the virtual machine I installed it on.   I may load one machine at the emergency clinic jusst to see if anyone actually notices.

Not a lot of info about who's project this is, but they have given it a lot of time and thought.
Posted by Unknown at 3:19 PM 2 comments:

Picture of my new puppy

If there is no picture, it didn't happen.. so here is the picture..
Avimark running in puppy 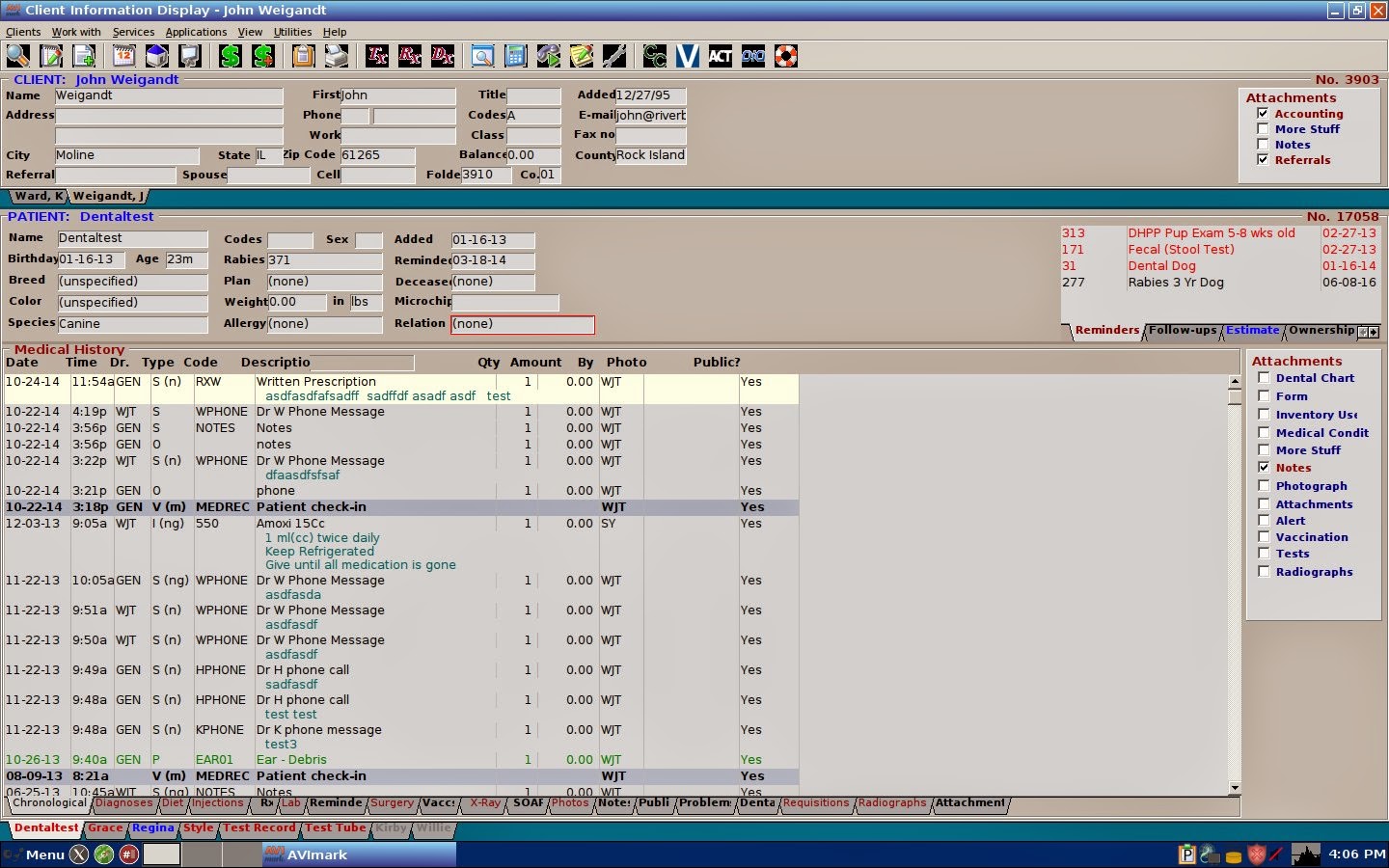 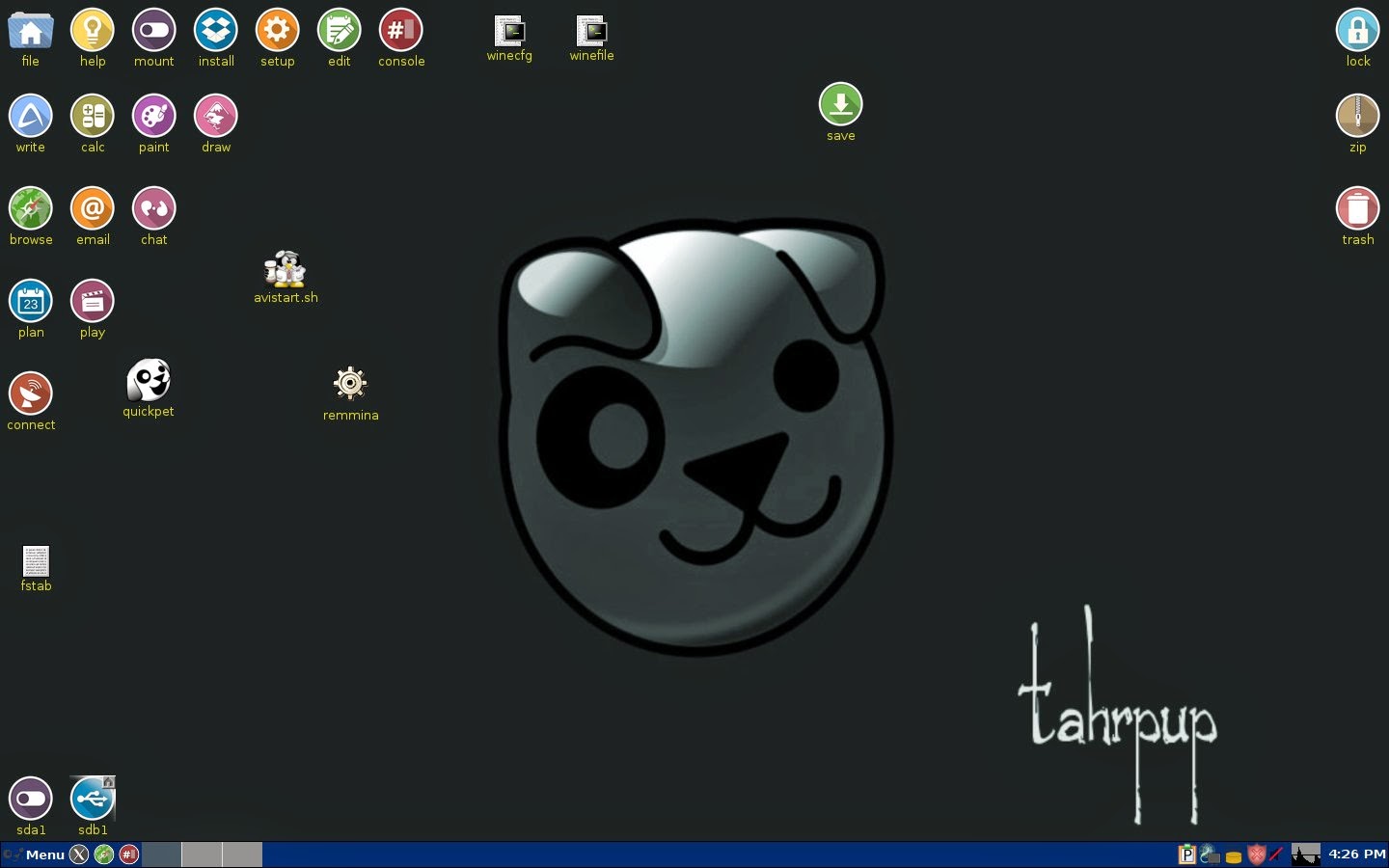 Posted by Unknown at 2:10 PM No comments:

I was playing with various versions of linux on memory sticks as a simple way to instantly upgrade xp stations.  Pre config, clone that sort of thing.

I loaded a nice ubuntu 14.04 on a modest 16 gb pny memory stick, and it ran quite well.  would pause occasionally for large disk writes because of the slowness of writing to the stick, but running remmina to a rdp desktop was slick and quick.  Also could run wine and avimark native.

Cloned to another slightly different pny stick, and the performance was dismal.  Moral to the story.. they don't always put the same memory in their sticks.. widely varying performance.

So I took another look at puppy.  For those of you who don't know, puppy loads from a cd or memory stick and runs almost entirely in the host computers ram with no install or alteration of the host's drive.

It has really matured in the last few years, and I can load wine, remmina, etc etc relatively painlessly, and this little bugger runs fast even on old legacy stuff.

The video drivers can be a little fussy on really old equipment, Press the space bar at boot up to go plain vanilla and choose the right one after booting.  but I can plug a 4 gig memory stick into practically any machine that can boot from usb, and have a workstation that can run Avimark via rdp or natively in wine instantly with zero install on the host.

1 edit of the fstab to connect to the workgroup "server" and I am off and running.

or plug in the login info to remmina for rdp and off we go.

Puppy's desktop was pretty ugly a few years ago, but they now have some nice icons and themes that are simple to install, along with a whole host of email calc paint write web browser and other utilities.  It didn't take me long at all to have a very good looking desktop.  the interface is very intuitive..  works more or less like windows.. start button down in the lower left.

Windows shared Printers were found and installed automagically.. even the dymos

You have access to the whole ubuntu repository for just about any function you care to add, and the install process will strip it down to the essential.  Like not loading 50 language/keyboard options and not loading the non compiled libraries etc.

When you log out, any changes are saved to a file on the stick and loaded at next boot.

Best of all, you can save your configuration as a remastered install cd, so that creating new identical sticks is an absolute no brainer... or you could provide the world with pre configured puppy clones.

Staff won't stay off the interwebs?  plug in a puppy stick, boot the workstation from that, and so what if they hurt the install (unlikely in linux anyhow)
Posted by Unknown at 2:00 PM No comments:

OK I finally got there, How I saw the light

No combination of permissions and settings seemed to work on a cifs mount.  The cifs and the nautilus browser mounts are qualitatively different and apparently use a different code base.

But Avimark to the rescue (in just a bit)

first .. I mounted the Windows7 server share with this line added to my /etc/.fstab configuration (the config file that tells linux what to connect to at boot time.

/tserver/avimark  is the network path to the server

cifs is the file system type   uid gives my local user permission  cache=strict dictates the caching behavior trying to mesh linux and windows rsize=131007 maxes out the blocksize that can be read across the network.

Navigate to /home/jtw/mnt on the client

invoke wine avimark.exe from a terminal command line..and....it fails... Cant read the indexes at startup and says there is a lock on them...   sooooooooo

Start up the Avimark guardian/server stuff on the server.

navigate to /home/jtw/mnt on the client

Now I can finally configure a linux client to load the server directory at boot, and create a desktop icon that will invoke a script that navigates to the /home/jtw/mnt and invokes wine avimark.exe /connect..

So as I suspected avimark server does more than just load bigger blocks of data... It controls a lot of the cacheing/ oplock crap locally and brokers communication better, so that all the parts of avimark that failed me before, now work


Appointment book and whiteboard have been the hangup/ sticking point in this scenario...

oops smbnetfs not as holy as I thought

turns out that Avimark cant go down the directory tree and retrieve documents and attachments using the smbnetfs mount.

it is still a useful tool for ad hoc browsing of your network, but doesnt give the full avimark functionality.

So for now, until I break the cifs permissions code, the only way I know to have full function in Avimark/wine is to use the x11rdp terminal service model that I have been running on for almost 2 years now, or to use a linux server instead of a windows server.

cifs seems to work connecting to the linux server and working peer to peer, just not cifs to a windows server....YET.... I am not devoting full time to this, but I will keep working to solve this final piece of the puzzle.
Posted by Unknown at 7:34 AM No comments: